Missed the previous instalment, click here to read it.

Yesterday we anchored at Scotia Bay, just off of the Argentinian Station “Orcadas”. Unfortunately, the fog prevented the team from fully admiring the surrounding hills, glaciers, and numerous icebergs, but they reported that it was still a gorgeous sight nonetheless. As a part of this stop, several scientists and crew members visited the Argentinian Station and put their feet on land for the first time in many days. However, this was not the case for the team members who had to partake in calibration duty.

A key part of the survey team’s mission is to assess the abundance of krill around the South Orkney Islands. Achieving this requires well-calibrated equipment, which some of the team had to prioritize at this point in the mission. One of the team members is Eng. Ronald Pedersen, who serves as the main technician on hydroacoustic and electronic equipment on the survey. He has spent time during this stopover on setting and calibrating the echosounder for the “Saga Sea”, the vessel used for the survey.
This is much more difficult than it sounds.

How to calibrate an echosounder

In order to calibrate the echosounder, a small cupper sphere of six centimeters in diameter must be placed directly under the echosounder transducers, which are located under the vessel’s hull. The cupper sphere must remain there for several minutes while a variety of measures on the signal are taken and corrected. Through trial and error (and a bit of luck and some experience) it’s possible to position the sphere in the right spot. The measurement itself is quick, but currents and wind kept drifting the vessel, which made the target a moving one. After several attempts, the calibration was done and the correction factor (a single number that determines the deviation of the echosounder in relation to the fabrication standard) was obtained. This correction factor is essential in order to later transform the acoustic signal into krill biomass. 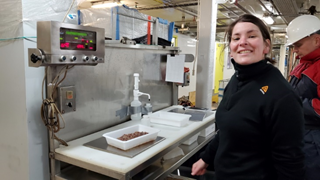 The krill survey team has been at sea for seven days and visited 28 trawling stations. After working around the clock, they finally concluded the first section of the cruise around the South Orkney Islands. Antarctic krill, Euphausia superba, is not the only zooplankton species in the Southern Ocean. Although it’s called a “krill survey”, the team usually gets more salpae than krill. Salpae are a gelatinous species similar to jellyfish that reach dense aggregations in the Southern Ocean, particularly in deep oceanic waters. Krill, on the other hand, tend to be more abundant on the continental shelf and shelf break –the submarine base of continents and islands – of the South Orkney Islands. There are also other types of krill species present, but they tend to avoid the dense aggregations of their larger cousins, and for good reason! Antarctic krill are voracious predators, consuming anything that can be filtered by their basket-like anterior extremities. 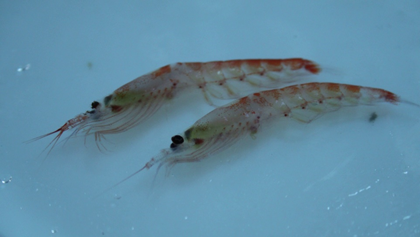 At its 40 to 60 mm as adult, Antarctic krill is the goliath of all krill species.

By taking measurements on the krill length and identifying their gender, the Institute for Marine Research (IMR) scientists will be able to estimate the demography of krill for this season, and the acoustic data will provide an estimate of krill biomass. Combining this information will help the team understand changes in the krill population over the years. It will also aid in the management of this resource, which is administered by the Convention for the Conservation of Antarctic Marine Living. (Resources (CCAMLR))

That’s the latest from the team on board the ‘Saga Sea’ vessel, as they continue their survey of the krill population in the South Orkney Islands.

If you missed the first two installments from their journey, click  here.

Ordered back in 2017, and soon ready to set sail ahead of 2019 harvesting season, our new flagship vessel Antarctic Endurance is a veritable floating showcase of shipbuilding expertise, sustainable harvesting technology and energy efficiency.