The Institute for Marine Research (IMR) team is hard at work on the survey, aiming to produce krill biomass estimates during the course of their journey. The team is busy collecting acoustic information on the krill, which helps them determine the proportion of krill among the zooplankton community, as well as its size structure.

The team is visiting pre-determined stations throughout the survey. At each station, they drop a scientific net into the water, approximately 200-meters deep. They then slowly haul the net to the surface while the vessel sails at approximately 1.5 – 2.0 knots. The team then extracts the sample from the net, usually somewhere between 0.5 – 40 kg, and takes it to the lab where each species is sorted, placed on individual trays and weighed.

The krill, however, receive special treatment. Each individual krill (up to 200 per sample) is measured, its gender identified and then it is ‘staged’. Staging is the most difficult part, as it consists of identifying the stage of sexual maturity of each individual krill. This ranges from juvenile to young adult to mature adult. Mature adults have their own stages of sexual activity, from ‘growing’ to ‘ready to spawn’ to ‘spent’. 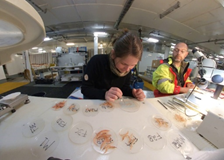 The team of scientists from IMR (including Astrid Rasmussen, MSc, and Bahar Mozfar, MSc) are feeling challenged yet stimulated as they learn more about staging krill. This is their first time participating on a krill survey, and they report that it has been a very gratifying, though demanding, experience.

Once the size structure of the krill population is measured, the relative abundance of each size class is used as input to transform the intensity of the acoustic signal into a biomass value. The larger the krill, the higher the total biomass estimate. 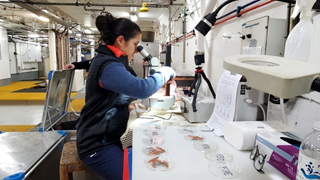 MSc Bahar Mozfar from IMR staging krill at the improvise lab on the ship’s factory.

Weather and whales along the journey

The team has reported that the weather during the early days of their survey has remained cloudy, gray and foggy. The scientists are far from home and working night or day shifts, but that doesn’t stop them from enjoying a good meal. On board the “Saga Sea” there is a plentiful buffet, to keep the passengers going strong throughout the survey period.

The whales are also having their own feast (on krill) during the Antarctic summer. Fin whales and humpback whales are common around the South Orkney Islands, as they gather here to feed on the plentiful supply of krill. There is still much that scientists do not know about the frequency of the whales visiting this area. To learn more, the scientists from IMR installed a mooring last season. A mooring is a weighted line anchored to seabed and equipped with several instruments. This includes a hydrophone to record whale sounds, which should help in giving an indication of the relative presence of whales in the area annually. 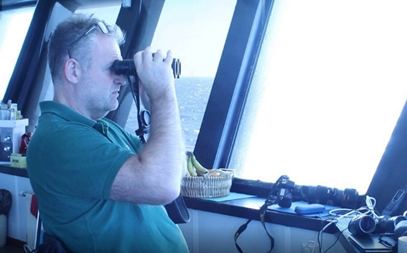 Dr Krafft from IMR searching for whales along the transect.

Whales are an important predator of krill and share many of the same predictable fishing grounds as the krill fishery. To understand the relationship between krill biomass and whale distribution, one of the scientists, Dr Krafft from IMR, records all whale sightings along the acoustic transects, which he later compares with the estimates of krill density.

Since the end of the whale-hunting era, the supply of whales has been slowly recovering, and these mammals are expected to take a significant proportion of the krill biomass in the future. According to the principles of sustainable fishing, the needs of whales must be considered in the management of the krill fishery.

That’s the latest from the team on board the ‘Saga Sea’ vessel, as they continue their survey of the krill population in the South Orkney Islands. If you missed the first installment from their journey, click here.

Last week, Runa Haug Khoury, our Director of Sustainability, was interviewed by IntraFish about driving sustainability further in the Antarctic region. Read the full interview below.