“This is a great opportunity to join Aker BioMarine and the IMR to learn about the efforts made by the industry and Norwegian scientists to provide an updated estimate on krill during the fishing season,” said Dr. Arata.

Their journey began on 30 January 2020, when Dr. Arata and the IMR team departed from Montevideo, Uruguay, on board the carrier La Manche. They sailed for six days before arriving on Coronation Island in the South Orkneys.

“The weather was perfect during the trip; the small bay where we met and boarded the ’Saga Sea’ vessel was perfectly calm,” added Dr Arata.

The team on board the ‘Saga Sea’ set off and as they approached the Southern Ocean, they experienced a significant temperature drop, from 20 Celsius to just 4 Celsius. Despite the chill, they were accompanied by wandering albatrosses and northern giant petrels, birds native to the area who began to follow the vessel from the sky.

The vessel itself was carrying much more than just supplies and fish products. As a carrier vessel it was also transporting personnel, mail, medication, spare parts and more supplies that are critical for the team to understand the current status of the krill ecosystem. This included two containers of equipment for conducting acoustic surveys on krill and for taking net samples on macro-zooplankton and juvenile fish. During 2020, the team will also conduct an experiment to test the feasibility for estimating the amount of krill that enters the net in real time.

“Starting a survey is always a challenge. It doesn’t matter how many times you’d done it, there is always a new challenge ahead. And each time, you must start by rigging the trawl frame and incorporating all the instruments into the net,” said Dr. Arata.

Once the team reached their first destination, they were able to get down to business of surveying. They began collecting krill samples using a scientific trawl net, with a mesh size of 7 mm, which is even smaller than the one used for commercial fishing. The purpose of this net is to catch macro zooplankton, including juvenile krill. In addition, the net is equipped with sensors to measure the depth, temperature, salinity and chlorophyll present in the water column as the net is trawling. This data provides a clear indication of water masses, depth and abundance of phytoplankton (primary food of the seas), as compared to the relative abundance and size of the krill caught at different stations. 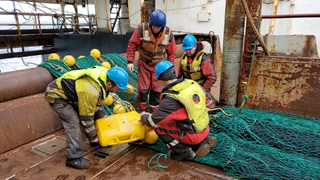 Deck crew from “Saga Sea” attaching the net sounder to the net.

The team quickly discovered that mounting the trawl net, even though much smaller than commercial trawls, was not an easy task. They required the expertise of a seaman, and sought help from the deck master and the crew from the ‘Saga Sea’ to assemble the net. The frame for the trawl is composed of a 6.2 meters-long beam, from which the mouth of the net is attached. A weight of 1,500 kg is then added to keep the mouth of the net open and vertical. During this trip, the team made special customizations to the trawl, resulting in a 12-hour effort to get the trawl ready for deployment.

Finally, the net was deployed at the first station of the survey, called A1. Another 30 minutes later, the first sample was brought on deck. The result was 15 kg of salpae and some krill. The A1 station is located in deep ocean waters off of the northwestern corner of the South Orkneys, where salpae usually dominate the zooplankton community during the Antarctic summer. 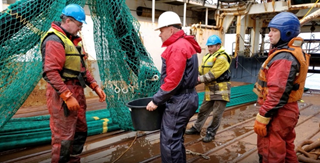 Dr. Ludvig Krag from the IMR (Norway) collecting the sample from the codend of the net.

This was enough to make the scientific team happy, as they had found a large enough krill sample in which to analyze the population in this location. The journey for Dr. Arata and the IMR team continues, as they move from location to location around the South Orkneys to continue investigating the krill population in the days ahead.

Last week, Runa Haug Khoury, our Director of Sustainability, was interviewed by IntraFish about driving sustainability further in the Antarctic region. Read the full interview below.