A captain's life in Antarctica

Whether at sea, or onshore, in Oslo, Houston, or somewhere in the Southern Ocean, our people define who we are. Their skills and dedication continue to drive us ever forward.

The epitome of cool, calm, collected, and with decades of sea - faring experience, what Hans Jan Leithe doesn’t know about krill fishing, well, probably isn’t worth knowing. In this post we will get to know Leithe, the captain of Antarctic Endurance, through a series of questions:

You have actually been with Aker BioMarine from the very start?

Yes, and I have been working for Kjell Inge (Røkke) since 95. He had vessels in South America, we had one in Africa, one in Russia, I think most people didn’t like it when we started up operations in Antarctica.

Is the crew on your vessel always the same?

No, from when we started this project back in 2004 the main guys that came from Russia and Norway are still with us, but they are spread all over. It’s a mix.


Does this make your job as Captain more difficult with a frequently changing crew?

Of course, you always want to pick your own crew, that you trust one hundred percent. When you send someone to do a dangerous job out on deck, you want to know them and trust them. We have few who have been with us for a long time. 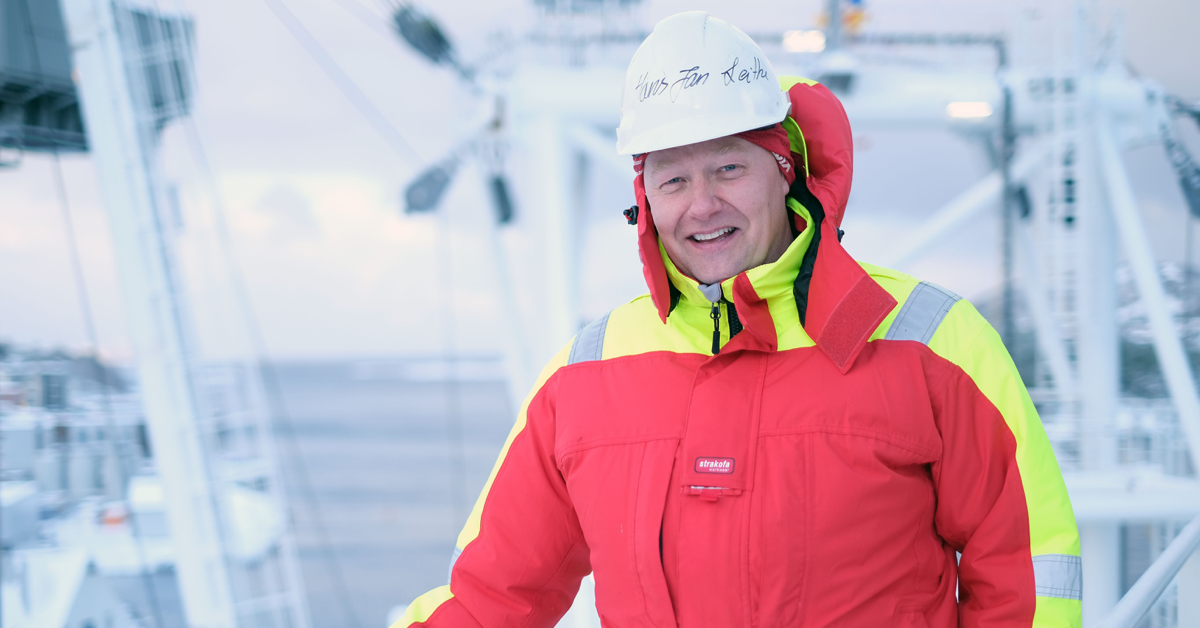 It is difficult to imagine how tough the crew needs to be.

It is not only the toughness though, people you trust are much harder to find than people with skills. This project, when it started back in 2004, wouldn’t have succeeded if it had been a one hundred percent Norwegian crew. A lot of the Russian crew we had, they were the cream off the top of the Russian fleet, that were fishing krill back in 95, 96. If he was a deckhand, he was also a welder, he is also a mechanic and he is also a cook. When we had a major rebuild, I would say fifty percent of it was actually done by our old crew.

Actually no, not really. We changed it, we did something different. You could catch krill pretty much the same as fish or shrimp, but we created Eco Harvesting to make both the product and the whole process much better.


And your name is actually on the Eco-Harvesting patent isn’t it?

Yes, together with Robert the bosun, he is pretty much retired now, he was the one who worked out the pumping system. But there were so many people involved in developing the ideas which improved the fishing and processing techniques onboard. We all felt we had ownership of the project, it was never just a job, we were talking about krill when we were off shift, when we were at work, there was always this argument or discussion on how to do it. Nobody ever mentioned, ‘we can’t do it’.

Well you have been proved right, and the new vessel continues this spirit of innovation doesn’t it?

Yes, the vessel is never going to be one hundred percent how we want it to be, but we are going to be proud taking it out, of course. Again, we feel that we have had ownership of it. We have been very lucky over the years, especially with the owner we have, that we got support and always try out new ideas, ‘normal’ people wouldn’t agree with it. They would just look at the immediate costs.


Talking of ‘normal’, just how do you get through being at sea for three months at a time?

I don’t really think about it, as it is what you’ve done since you were a kid. Today you have the internet, wish we push to get the fastest connection, so people can stay in touch, without it costing a fortune. I might read a book, or watch a movie when I am off shift, but most of the time you end up standing on the bridge, not sleeping.


In just one sentence, explain what you think makes Aker BioMarine as a company so unique?

I have been able to see and be part of ideas, seeing them grow from scratch on paper napkins, to successful fishing and processing technologies.


If you were naming our next vessel what would you call it, and why?

Antarctic Sun, it sounds like a bright, fantastic lady.

Want to read more about our people? Download the brand book below:

Aker BioMarine has texted Preben Alexander Jensen, crew member onboard Antarctic Endurance. They are currently harvesting krill outside the coast of South Georgia. Read more in our text message conversion:

Meet our people: The Fisherman

A tough woman with a tough job

Whether at sea, or onshore, in Oslo, Houston, or somewhere in the Southern Ocean, our people define who we are. Their skills and dedication continue to drive us ever forward.